The majority of Uzbekistan’s population are made up of ethnic Uzbeks which are a Turkic group, however there are also significant minorities of Russians, Tajiks, Kazakhs, Karakalpaks and Tartars. The majority of the populace is Muslim however, there are also Orthodox Christians, Buddhists and Jews living in the country. As Central Asians, Uzbeks have a reputation for being welcoming. People are typically greeted with handshakes. It’s also considered polite to ask several questions regarding the person’s family or health but without having to wait for answers.

Uzbekistan excursions are a wonderful time to taste the local cuisine and get some ideas back to you. A typical meal may consist of meals like palov, which is rice mixed with onions, carrot and meat. Or mutton cooked in a tandir oven. Uzbeks also eat dumplings called manti and a local variety of kebabs. There is a wide variety of Uzbek food with traditional black and green teas, as well as drinking yogurt called the ayran. Uzbekistan, although a predominantly Muslim country, is also a secular nation that permits you to enjoy the local wines. 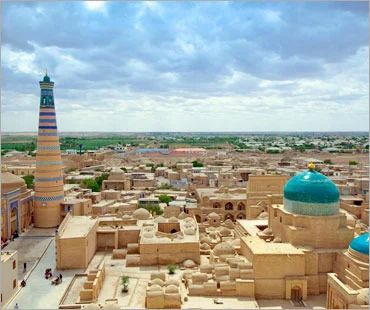 Uzbekistan is part of the Central Asian group between Asia and Middle East. Its neighbors are Kazakhstan, Tajikistan, Kyrgyzstan and Turkmenistan. Uzbekistan has a coastline that runs along the Aral Sea as well as the massive, yet very shallow lake Sarygamysh. A majority of the country is covered in the Kyzyl Kum, also known as the “red sand” desert, and only a small portion of fertile land within the Fergana Valley. Uzbekistan’s mountains include the Tian Shan Range in the south of the country.

Uzbekistan’s bazaars are a shopper’s paradise. The bargaining here is not just an enjoyable way to live however, it’s also a fantastic time. The Tashkent markets, particularly the Chorsu Bazaar are great places to shop for bargains. There are Soviet memorabilia like stamps, portraits by Lenin military uniforms, and caps. There are also local souvenirs like intricately designed pottery, colorful clothing rug, jewellery and rugs that is made of traditional silver. The Bukhara bazaar is perhaps the most photogenic, with its abundance of fresh food and smiling locals.